“We make the life of our trading partners and their customers easier by way of rapid and efficient distribution of exclusive household goods that we all need.”

Our trading partners have access to a worldwide network of producers and manufacturers. This network allows us to respond quickly to their requests and to anticipate future changes in the market. Additionally, our modern warehousing guarantees the availability and short-term delivery of more than 1000 high-yield items from the areas of household, cleaning & floor care, HACCP and season & beauty. Our reliability & flexibility are valued by our customers.

With our products, we want to help and support people in their everyday life. Be it innovative solutions for cleanliness and tidiness, be it high-quality and durable products for professional use – CORONET® makes life easier.

“We want to become the leading household brand in Austria by discovering, developing and selling products, that truly make life easier.”

That is why we are constantly striving to improve. Standstill is simply not an option for us. We want to actively shape the future and therefore we are always looking for new and unique products. We don’t only recognize trends. We set them.

We live our values. And that means whoever reaches out to us will have a reliable partner. CORONET® stands for a world of trade in which the focus is on people. And for us, this applies to both our customers and our employees.

We would like to emphasize this point. Because maintaining and improving our high quality standards is very important to us.
For this reason, CORONET® decided to obtain a DIN EN ISO 9001:2015 certification. The certification guarantees the consistent application and continuous improvement of our quality management system.
Our quality policy is reviewed annually for appropriateness and usefulness and is adjusted if necessary.
This allows us to stay up to date and to be a reliable partner to our customers in all situations. 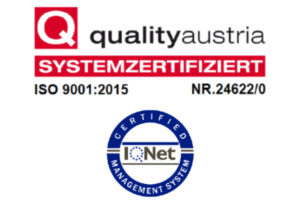 CORONET® is a brand with a long tradition. At the beginning of the 20th century, our company was founded under the name “Hessische Hölzerwerke” in the German town of Wald-Michelbach. Already in the 1920s, it acquired renown as a manufacturer of household goods. We started with the production of brushes and brooms. But quickly, due to the burgeoning popularity of plastic, our product range increased.

In the 1970s, an expansion ensued. Numerous subsidiaries and production sites were founded and opened, respectively. We became a truly European company with branches in e.g. the Netherlands, France and Poland. At that time, we began to introduce to brand name CORONET®.

In 2000, CEO Peter Salcher founded CORONET® Austria GmbH (Ltd.) as a subsidiary of the “Hessische Hölzerwerke”.

After our German parent company had encountered economic difficulties, CEO Peter Salcher successfully separated CORONET® Austria from its parent company in 2016. Since then, we have operated autonomously and independently and have held the trademark rights for CORONET®.

In 2019, Peter Salcher handed over the management of CORONET® Austria GmbH to Gerhard Ausserhuber, who was in charge until  May 2021 and mainly responsible for the development of the new product lines puro ECO CLEAN and ROYAL HOUSEHOLD.

Markus Schmid joined the company as Managing Director in June. Today, we employ 16 people at our 4,000 m2 company site in the Upper Austrian town of Waldneukirchen. In our warehouse, we manage 4,000 pallet spaces. From there, our clever household products are sent to the whole world. CORONET® products can be found in e.g. Ireland, Sweden, France, Seychelles, and Kazakhstan.

THE FOLLOWING COUNTRIES ARE SUPPLIED BY CORONET® AUSTRIA: